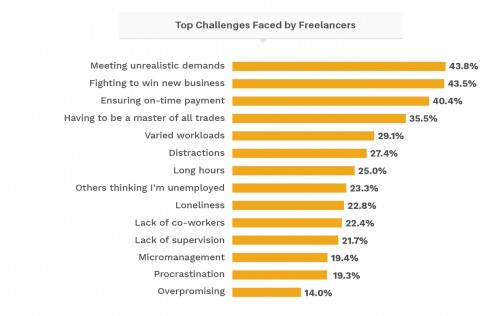 Although freelancing provides a fair bit of freedom from the “rules” of a traditional job, there are still a lot of significant challenges freelancers face on a regular basis. A new study by Skynova, ‘Overview of Invoicing: Exploring Invoicing Habits and Woes of 1,000 Freelancers’, has revealed exactly what these challenges can be.

The biggest challenge that freelancers face is meeting unrealistic demands. Over 43 per cent of respondents labelled it as their most significant obstacle. "Fighting to win new business" closely followed with 43.5 per cent. According to the participants, new business is their biggest challenge, which may only get harder since the demand for freelancing has increased in Hong Kong.

Almost a quarter of all freelancers (23.3 per cent) face the problem of people thinking they are unemployed. While freelancing can be a type of work that people do in between jobs, it is increasingly becoming a full-time career for tens of millions of people around the world. With flexible working becoming more mainstream, full-time freelancing is no longer considered out of the norm.

This article was published in the Freelancing.HK-News 71.